This week’s post is dedicated to all those cat people out there. Yes, you know who you are!

I am going to take a leap and assume that most of you are as average as I am. J Having said that, I am pretty sure that you will be as surprised as I was to discover how many different species of cats there are on this planet. There are thirty-six different species of cat, and there are numerous sub-species of those. So we’re talking a lot of cats here! This makes cat people very happy. 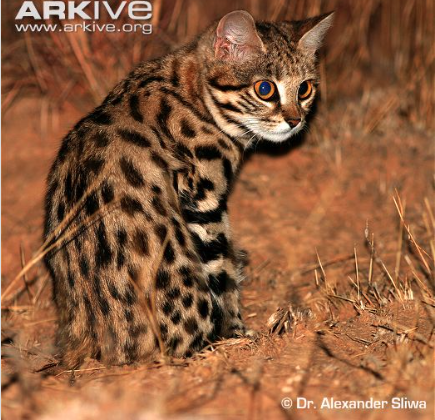 We have discussed a few endangered cats before, but this is one of smallest of all the wild cats. Its name, Black-Footed Cat, is a misnomer because the fur on this cat’s feet isn’t black. However, their pads and the soles of their feet are black. I read that there was an attempt to rename the cat, but it failed.

According to the IUCN, the Black-Footed Cat is vulnerable. This is a good place to take a moment and go over the IUCN’s (International Union for Conservation of Nature) definitions, so here they are:

CRITICALLY ENDANGERED (CR) - A taxon is Critically Endangered when it is facing an extremely high risk of extinction in the wild in the immediate future.

ENDANGERED (EN) - A taxon is endangered when it is not Critically Endangered but is facing a very high risk of extinction in the wild in the near future.

VULNERABLE (VU) - A taxon is Vulnerable when it is not Critically Endangered or Endangered but is facing a high risk of extinction in the wild in the medium-term future.

And who is the IUCN anyway! If you’ve been reading my posts you will know that I refer to them pretty much every week. The IUCN is the world's main authority on the conservation status of species. A series of ‘Regional Red Lists’ are produced by countries or organizations, which assess the risk of extinction to species within a particular area. The IUCN is the benchmark by which all organizations dedicated to conservation are measured. Pretty impressive! 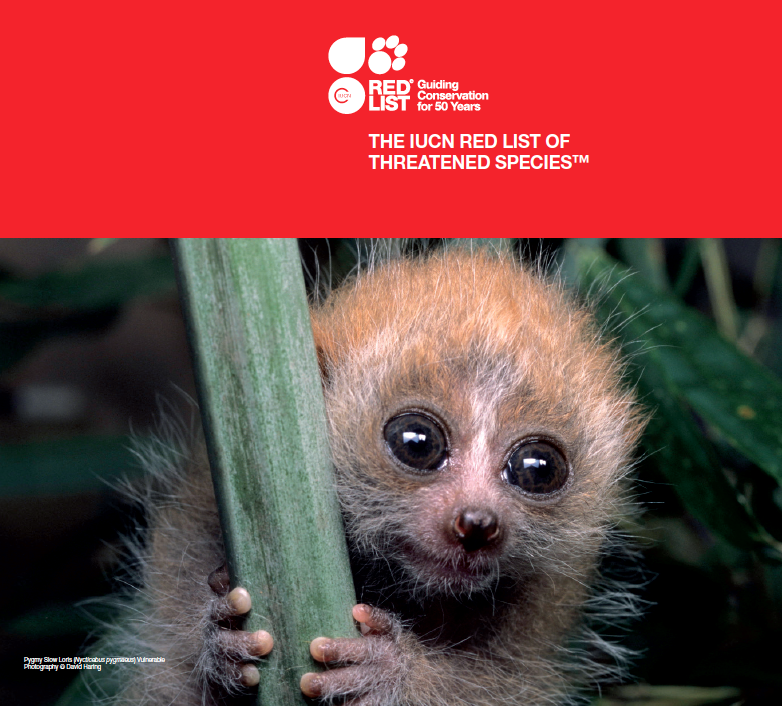 The above picture of the Pygmy Slow Loris is taken from the IUCN’s brochure, which can be found at the following site:

So now that we’ve side tracked a little, let’s see if we can’t get back to the star of this week’s show; The Black-Footed Cat. 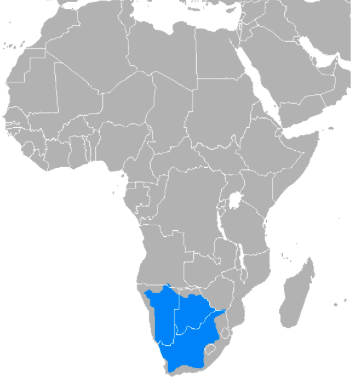 The Black-Footed Cat is endemic to southwestern Africa. It is the smallest of all the African cats. Their weights will range from about two and half to four and a half pounds, the male being significantly larger than the female. They are one of the smallest cats of all cat species including the domestic cat. They have a beautiful spotted pattern, which expands to strips at the shoulder, tail and legs. The tail is quite a bit shorter than we are used to seeing. One interesting bit of information is that this cat does not climb trees. This is probably due to their body structure. I suspect that there is a connection between the short tail and the lack of need for balance since it doesn’t climb. I could not confirm this assumption. 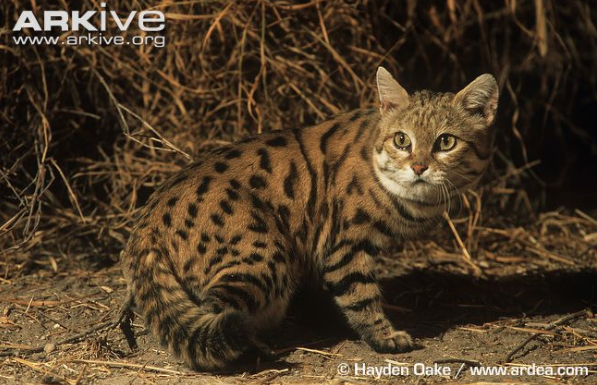 As you can see from the above picture, they are short and stocky. Although their short legs do not give them the ability to climb well, their low profile helps them to crouch and hide in short grass, and weeds. It also allows them to find refuge in small places, such as beneath outcroppings of rock and termite mounds. 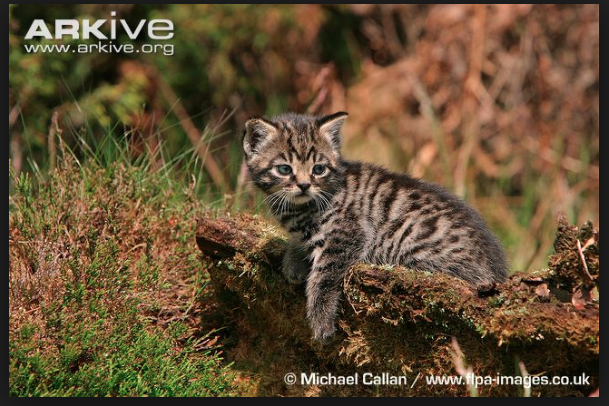 This little cat is known for its bravery and tenacity. For their size, the Black-Footed Cat is considered quite ferocious, especially when cornered. They are loners by nature and will fight to protect themselves if they find it necessary to do so. As a result of this behavior, the cat has been nicknamed the ‘ant-hill tiger.’ 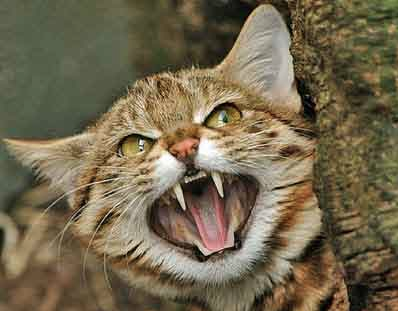 This cat is crepuscular and nocturnal, feeding on small mammals, birds, insects, arachnids and reptiles. They hunt by the stalk, run and pounce method, which is familiar to domestic cat owners. Rarely stopping for a drink, the Black-Footed Cat derives most of their moisture from their diet. 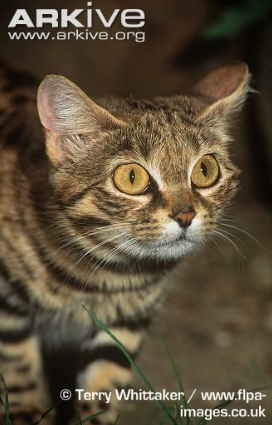 As with most of the endangered animals we have met here on my blog, a diminishing habitat is the main cause for the population depletion of the Black-Footed Cat. In this particular case, the loss of habitat is reducing their food supply. They are also falling victim to traps and poisons, which are set out by farmers to catch and kill larger prey. The Black-Footed Cat is too small, does not interfere and is not a threat to the local farming communities. Although there are laws to protect the species from being traded internationally, and hunted, coordinated efforts to protect this species are minimal. However, they are being breed in zoos. Perhaps one day those zoo cats can be safely returned to the wild.

I found a video I know the kids will enjoy. It features a baby Black-Footed Cat at the Brookfield Zoo in Chicago, Illinois. Enjoy!

Just for fun, I wanted to also add this video of another cat. It seems all cats are curious, from our domestic friends all the way up to the big cats. In this particular video, the pallas cat or manul, is very curious about the camera. It’s quite comical!

As always, my sincere thanks to Arkive.org for some of the information and pictures. Follow the below link to their WEB site where you can meet so many other spectacular animals.

Please see the below citations, which include source material and further information I used in researching the Black-Footed cat for this blog post.  There is plenty of additional information on those sites if you  are interested in reading more.