Also known as the Takhi 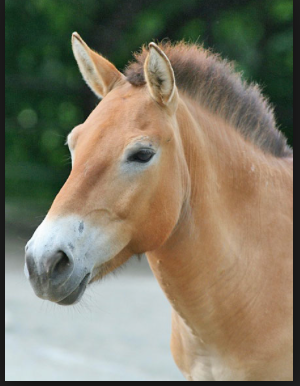 First, I want to thank Mrs. Long’s and Mrs. Youngman’s third grade class for their enthusiasm and interest. They are the inspiration for this blog post. They suggested that I write about horses, and this was the first horse I thought of because it is endangered. In fact, according to the Smithsonian National Zoo, Przewalski’s Horse or Takhi, is the last of the truly wild horses.

We’re going to learn a lot in this post, so let’s begin. I want to do something a little different this time. In many of my blogs I have told you that man and his poor management and use of the environment has caused the extinction of many animals and left countless numbers of endangered animals struggling to survive in diminished habitats. In the case of Przewalski’s Horse, the story is pretty much the same. Man does, however, have the capacity to change this ongoing problem. We do have the ability to make things right, and the Takhi is an example of man doing the right thing.

The story of the Przewalski’s Horse is a comeback story. Once wild horses roamed the steppes* of Europe into Asia. The increasing human population and their domestic herds of grazing animals, forced Przewalski’s Horse further into great barren areas. Finally, they found themselves in the Gobi Desert of Mongolia. 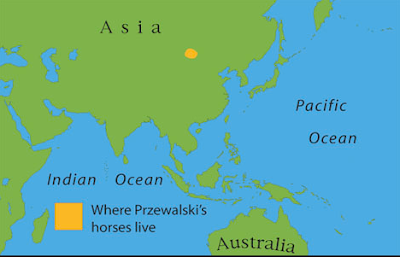 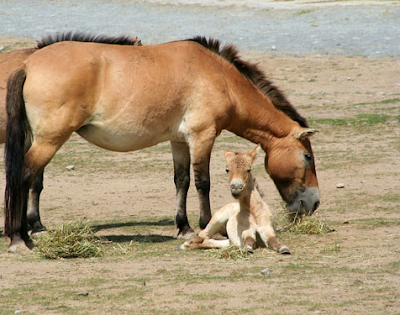 Many of you may believe that we have wild horses living in the western plains of Texas, but that is not true. Our wild horses, or mustangs, as they are called, are descendants of domesticated horses brought here to the United States by the Spaniards. Our horses are trainable. Przewalski’s Horse will not submit to training. It is truly the world’s last wild horse.

The Przewalski’s Horse is small, and more compact than the horses we are used to seeing. It is more the size of a zebra than a horse. Its skull is massive and long, with wide set eyes so that it has a wider range of vision. It has a very thick coat, which is usually a yellowish to a reddish brown color. Its lower legs are somewhat darker in color as is their muzzle (nose). 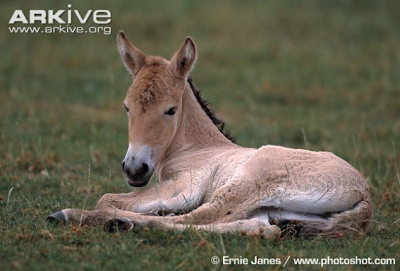 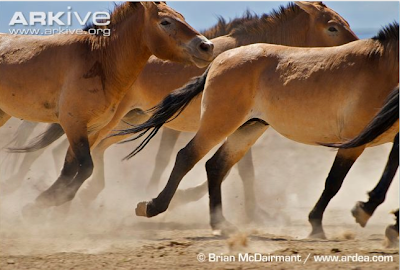 I typically quote, or mention the IUCN* list.  In the case of Przewalski’s Horse, the IUCN had listed it as extinct in the wild until 2008. As a result of man’s intervention and international cooperation, I am thrilled to say that this horse is no longer extinct in the wild.

I want you to think back on those thirteen captured foals, which were brought to zoos. Those captured horses became the stock for resurrecting Przewalski’s Horse. It was international cooperation of foundations and zoos that saved this horse, and helped to reintroduce it into its historic home in the central ranges of Asia.

With those thirteen foals in mind, I have found a video for you. You will see the people of Mongolia and hear one of them speak in their own words about his experience with Przewalski’s Horse. When you watch the video, take note of the people and their reaction as they take part in the re-introduction of Przewalski’s Horse to their land. It must have been a wonderful feeling to see this horse run free again, for the people who participated, for the researchers who worked tirelessly to make it happen, and for the horse, who once more felt the land of the Gobi beneath their hooves for the first time in decades.

I do hope you enjoy the video. Make sure you are on my web site so you can see it, because it is truly thrilling.

You may want to learn more about this stunning animal, and these two sites will give you additional info:

Once again, my sincere thanks to ARKive.org for their information and pictures.

Thank you for visiting, and please come back to see us again. As for Mrs. Long’s class and Mrs. Youngman’s class, I cannot thank you enough for your enthusiasm and your suggestions. Please keep me in your classroom, and don’t forget to write with your suggestions.

*IUCN - International Union for Conservation of Nature and Natural Resources

J.E. Rogers, Author
The Sword of Demelza, a middle grade fantasy where endangered animal heroes roam the pages.
(Don't forget to get your copy for Christmas for that special youngster in your life! - Thank You.)

Posted by Jeanne at 5:54 AM No comments: