Wombats are one of Australia’s iconic marsupials. It is a pudgy little mammal that looks like a cross between a bear and a pig.

So let’s visit Australian and talk about wombats!

Like Koalas and Kangaroos, a wombat’s babies develop in a pouch. Unlike Koalas and Kangaroos, a wombat’s pouch is on backward. The reverse position prevents dirt from getting into the pouch. Since the wombat is a burrowing mammal, their babies, and the inside of their pouch, would get dirty if the opening was located at the chest as opposed to the rear. 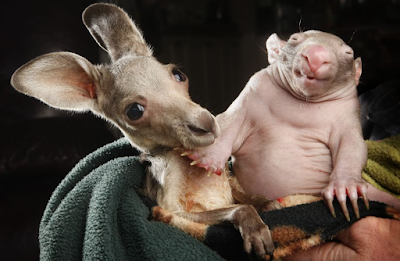 Photo credit: Wildlife Kilmore Rescue Centre in Victoria, Australia
Note the claws of the wombat. They are perfect for digging! 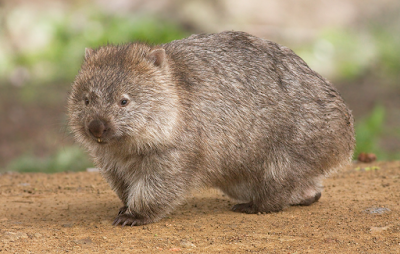 This week we will take a look at the critically endangered and world’s largest herbivorous, burrowing mammal—the Northern Hairy-Nosed Wombat.

Critically endangered according to the International Union of Conservation of Nature

The Northern Hairy-Nosed Wombat has a wider nose, and longer and more pointed ears than the other two species mentioned above. This wombat, like other wombats, is short and stocky. The whiskers sticking out from the side of its nose are what have given this particular species its name. 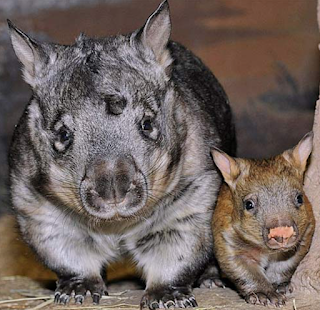 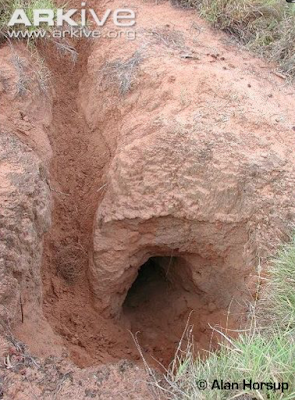 Wombats live in arid areas where they can find sandy soil in which to dig their homes. They spend most of the day inside an elaborate burrow system, like the one in the above photo. The entrances to their burrows are usually located near the base of a tree, and they will emerge at night to graze on different types of grasses.

They will only mate when food resources are plentiful. At birth, a baby wombat weights only about two grams. It is about the size of a jellybean. It makes its way to its mother’s pouch where it will develop over a five-month period. When the young wombat leaves its mother’s pouch, they will stay in the burrow waiting for their mother to come back from foraging for food. 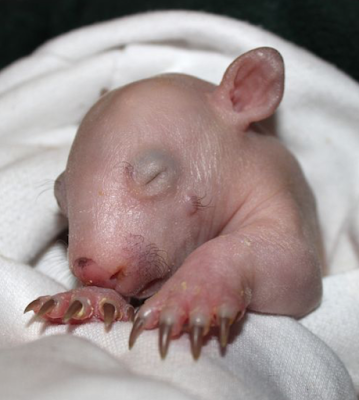 The Northern Hairy-Nosed Wombat is a solitary animal that can grow to a length of forty-two inches and can weigh as much as sixty-six pounds. 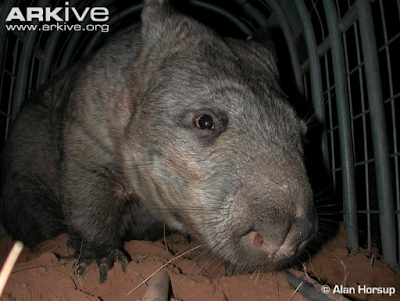 Currently, according to Arkive.org, there is just one population of approximately 90 individuals in the Epping Forest National Park, Queensland, Australia. (http://www.arkive.org/northern-hairy-nosed-wombat/lasiorhinus-krefftii/)

A dingo-proof fence protects this last colony. Dingoes are an introduced species of dog which preyed on the wombats and were partially responsible for the reduction of their population. Drought and brush fires are also a primary cause of their decline. Farming has contributed to a loss of habitat. 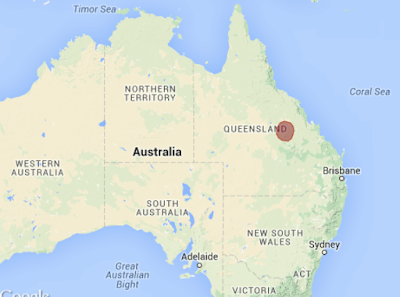 I have found a wonderful video for you. It’s narrated by Robert Irwin, and he provides a lot of information about wombats.
https://www.youtube.com/watch?v=HNq8mjYDLSE

If you would like to learn more, visit any one or all of the following sites:

As usual, my thanks to http://arkive.org/for some of the information and images I have used in this blog post. Please visit us again. 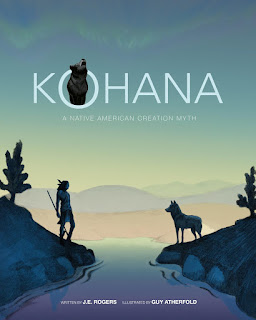 To read more about it visit: Kohana

Posted by Jeanne at 6:46 AM No comments: