MONITO DEL MONTE
The Monito Del Monte is not a fruit!  J

This little critter is a monkey. No it’s not! It’s a marsupial! No it’s not. It’s a monkey. OK! Let’s settle this argument. Although it is called Monito Del Monte, which translates to 'Little Monkey of the Mountain,' it is actually a marsupial. This little guy has a pouch and its young develop there until they are too big to fit and ready to set out on their own. In between time, the mom carries her babies on her back.

I know what your thinking. You’re thinking that marsupials live only in Australia. Let's talk about that, but before we do, let's meet this week's guest star! 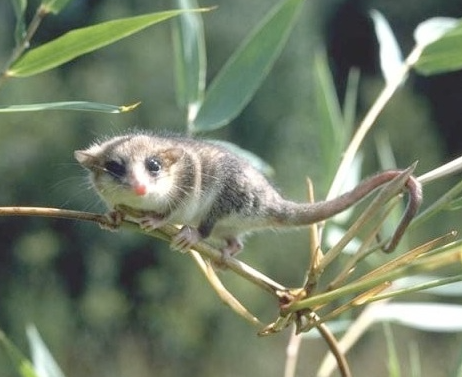 We have had previous discussions and posts about why life forms on Australia are so different. That difference is mainly due to the manner in which our continents developed. We have talked about it, but, let’s go over it once again. At one time, eons ago, continents were connected in one huge land mass called Gondwanaland. Slowly, over millions of years, this large land mass broke apart and drifted away from each other becoming the continents that we know today. After the messy separation, life forms on the continents developed differently. Before the continents separated, the Monito Del Monte, developed in the area of Gondwanaland, which would become Australia. However, when the separation began, the little Monito Del Monte was left behind to fend for itself on the land mass that would become South America. It now lives only in South America and can be found in the dense, humid forests of Chile and Argentina. By the way, the result of that early continental drift not only left this particular marsupial in South America it left others as well. There are quite of few marsupials in South America, but there is only one marsupial in North America – the Possum. 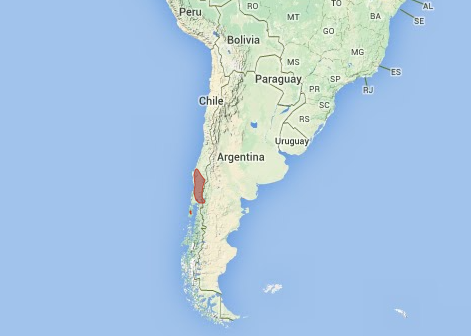 As you can see from the below picture, the Monito Del Monte looks like a mouse. This little marsupial weighs in at about one pound and is approximately 3.5 inches long, not counting its tail. In this species, the female is typically larger than the male in both length and weight and can also be identified by its pouch where its young develop and grow. They are only slightly larger than a mouse, their bodies are rounded and they have short thick fur. Their ears are rounded like their bodies, and they are short and covered with fuzz. They also have black rings around their eyes. Very Cute!! 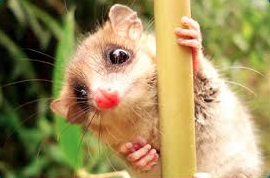 Our little pipsqueaks love to climb, and with their thick prehensile tail (a tail of an animal that has adapted to be able to grasp or hold objects) they can quickly climb up bamboo stalks and hold themselves in place. As you can guess, they are arboreal, which means that they spend most of their time in trees. Again, their grasping tail helps them to climb, stay in place, and also helps them balance. 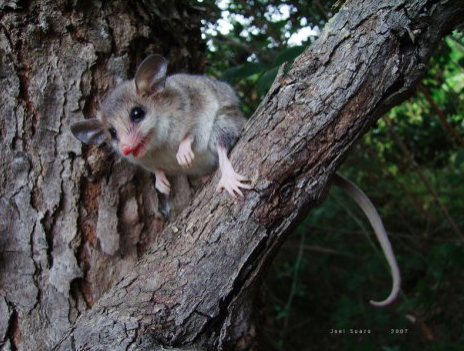 In the below picture, you can see their little grasping ‘fingers’ that also help them to climb. 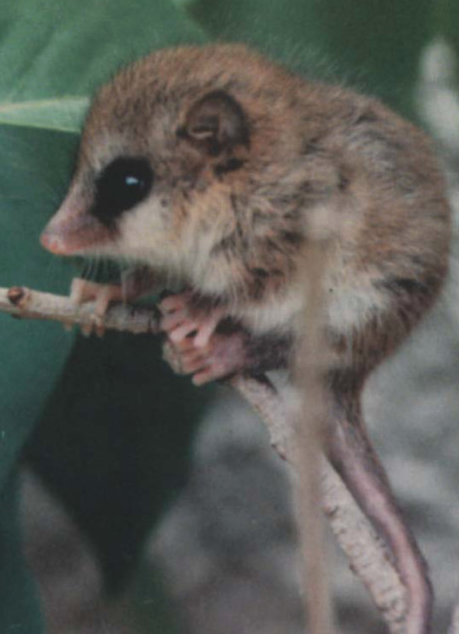 The Monito Del Monte is a nocturnal (active at night) carnivore (eats meat). He likes to eat insects and other invertebrates (an animal lacking a backbone). Its tail can store fat at its base, and, as a result, the little Monito Del Monte can double its weight in a week’s time. It is also believed that they hibernate in winter for six months when food is scarce. Unfortunately, even these unusual survival tactics are not helping.

This unique species is threatened outside of protected areas. Habitat fragmentation is occurring in part of its range where conifers have been introduced. Confers (a tree that bears cones and evergreen needlelike leaves) are replacing natural forests, which the Monito Del Monte calls home. As a result, our little friend has been dubbed near threatened on the IUCN’s red list.

Thanks to http://arkive.org, I have the below video to show you. :-). There is a ton of great information on their site, and they are extremely active in helping to bring focus to animals on our planet, many of which are endangered. Posted by Jeanne at 2:37 PM No comments: