HYACINTH MACAW
Please go to my website to fully enjoy the videos. 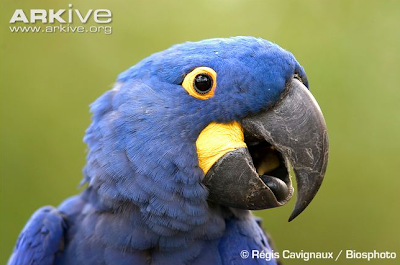 Today I thought I would bring you some information about a parrot that dwells within my memory. Strange, you say?  Let me explain. When I was just a kid, my parents took me, and my sister on vacation to Miami, Florida. There is a beautiful place there called, The Parrot Jungle. We had a photo-op at the jungle, and my parents wanted very much to take advantage of it. This is the resulting photo: 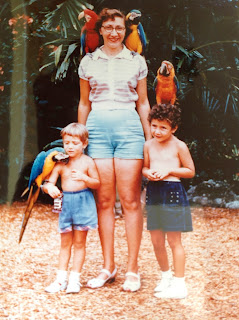 I am the little blond kid on the left. Yes, it was pretty scary having a parrot that big sitting on my arm. I think you can see my, uh, concern. Anyway, I was obviously impressed, but it was not that parrot on my arm that impressed me, it was the color of the hyacinth macaw. I never forgot it.  Years later I spent some time working in Miami, and before I left the city to return to the northeast, the last place I went was The Parrot Jungle. I went to say good-bye to the Hyacinth Macaw, and I never forgot him.

This post is dedicated to that childhood memory, and to the Hyacinth Macaw itself. 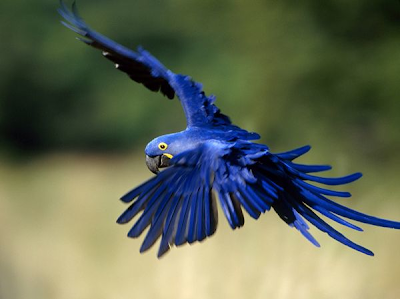 Let’s start with an important statement: This magnificent parrot is endangered.*  It lives in South America, particularly in Brazil, eastern Bolivia and northeastern Paraguay. Their historical range has not changed much, but their numbers have seriously declined.

Many people think that they live in rainforests, but they are more likely to be found in grasslands. Nevertheless, they do live in forests, but it is a misconception that they are found only in rainforests. Their cobalt plumage helps to camouflage them in the dappled sunlight of the treetops.

This is the largest of all the parrots, with a length of about forty inches, and a wingspan of about sixty inches. As you can see from the below video, they are graceful, and impressive flyers.

The Hyacinth Macaw is an omnivore. That means that it will eat just about anything. Its favorite meal happens to be a nut from a native palm tree. The nut is called the acuri. Interestingly enough, the Hyacinth Macaw has to wait until a cow has digested this particular nut before he can eat it. The exterior shell of the nut is so hard that it has to pass through the cattle’s digestive system where the hard outer shell is removed. Yuck! They also eat fruit and insects (sounds a bit better).

The Hyacinth Macaw is a very social and intelligent parrot. It lives in groups of ten to thirty birds, and it has many calls, squawks and screams to communicate with the group. You can hear their very loud squawk in this video.

Macaws typically mate for life. They share food with their mates and enjoy mutual grooming. In breeding season, mothers incubate eggs while fathers hunt and bring food back to the nest. The mother typically has one or two eggs, but usually only one survives. The chick will fledge, or leave the nest, at about three months, but the parents will care for their chicks for approximately another three.
The illegal pet trade has presented a major threat to this parrot. Pets! Parrots do not make good pets. My biggest concern is for the parrot, of course. You see, parrots can live a very long time. This macaw can live sixty years. They might even outlive their owner. Then what?

Effective enforcement of protection laws is required if this beautiful parrot is going to be saved from the fate of the other Brazilian parrots, such as Lear's macaw and Spix's macaw, which now teeter on the brink of extinction.

My thanks to Arkive.org for their information. Here is a link to their website, and more information on the Hyacinth Macaw:

Thank you very much for visiting, for taking some time to think about the Hyacinth Macaw, and for sharing in my childhood memory.