Sorry, I’m a day late, so gather the kids around, and we’ll get right to it. Please go to my web site to fully enjoy the pictures and any posted videos.

I love discovering and learning new things, and today I will share with you a creature that I discovered recently. I’m guessing you haven’t heard of this one either, so let’s call today 'Discover Tuesday!'

We'll learn about the Jaguarundi. That is not a misspelling, even though word check seems to think it is. The Jaguarundi is a species of cat, a most unusual cat to say the least. Here’s his pic: 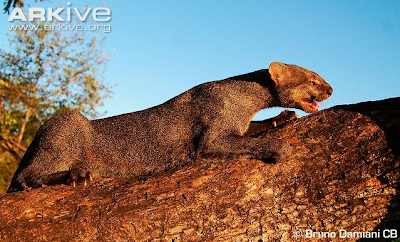 The Jaguarundi is a new world, neotropical cat. 'New world' is a name given to North and South America collectively in relation to Europe, specifically after voyages by European explorers. Neotropical refers to the area of Central and South America (excluding Chile and Argentina). However, Jaguarundis can also be found in southern parts of Texas.

This cat is an oddball among cats, and that’s an understatement. It looks like a weasel, with its long, low-slung body, flattened short head, and its rounded ears. It has honey colored eyes, and a uniform color, which is much different from other neotropical cats like the ocelot, which has spots. However, its coat color varies quite a bit. There are black, brown or grey Jaguarundis, and they can also be red or tawny colored with light under parts. The darker of the two will be found in the more tropical forests, while the lighter will be found in drier areas. 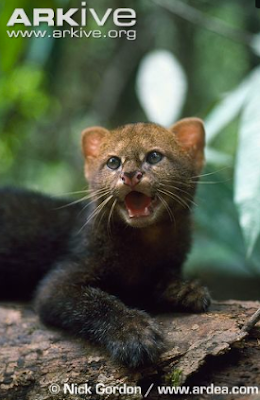 This cat has a number of vocalizations ranging from ‘a purr, whistle, scream, chatter, yap, and a bird-like chirp.

The Jaguarundi is diurnal. Diurnal means that it is active during the day, but they have been known to wander a night during a full moon (very strange). Their diurnal behavior helps them to avoid the ocelot, which has been know to take Jaguarundi for a meal. 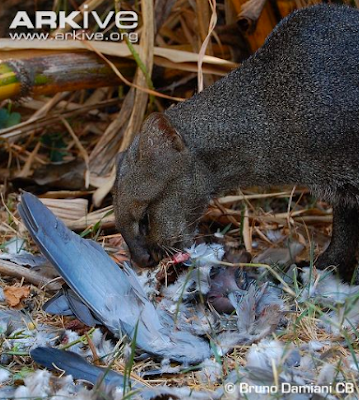 For its meal, the Jaguarundi enjoys small mammals, birds and reptiles, as well as occasional amphibians, fish and larger mammals. It has been observed to jump up to six feet off the ground to swat at birds in the air. Although they spend most of their time on the ground, they are very good climbers and are quick to scramble up a tree when pursued.

The habitat of this beautiful cat is quickly diminishing due to encroachment of human populations. Their usual habitat is now being converted for pastureland, and agriculture.

The IUCN, which I typically quote for you, is a bit conflicted over the status of this cat, and as a result they are keeping a close watch to determine accurate information. It appears as though it was once thought to be more plentiful then it currently is, thus their concern.

My thanks to Arkive, for information on the Jaguarundi, and also to the Wild Earth Guardians.

Thank you for stopping by, and feel free to leave a comment.
Enjoy,
J.E. Rogers