In a recent blog post, I had given you information about the Red Wolf, which is critically endangered here in the US. This week, I decided to travel overseas to take a look at the Ethiopian Wolf. The Ethiopian Wolf is native to the highlands of Ethiopia, and it is, according to the IUCN, endangered. Its populations are limited to a few mountain ranges, one major group living in the Bale Mountains. 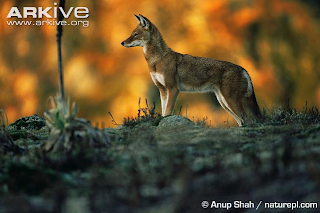 Now that we know how extremely delicate the populations are, lets take a look at this beautiful animal.

The Ethiopian Wolf is about the same size as a coyote. It has a long narrow skull, and is red and white in color. Unlike other canids, the Ethiopian Wolf is a picky eater. He requires a specialized diet of Afro-alpine rodents, and therefore has specific habitat requirements. He is the world’s rarest canid and the most endangered carnivore in Africa. 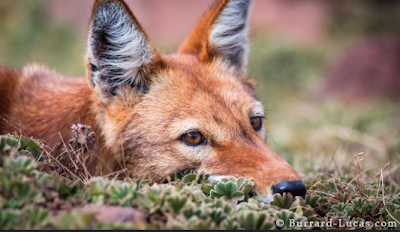 Eduard Ruppell first described this wolf in 1835 after providing a skull to the British Museum. Below is Ruppell’s depiction of the species. 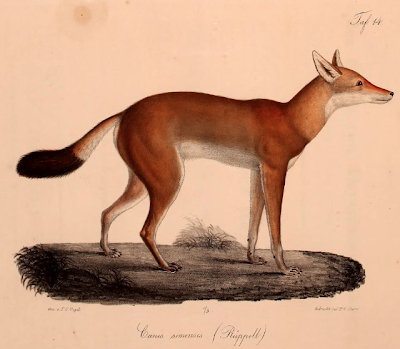 It is interesting to note that Charles Darwin hypothesized that this wolf gave rise to greyhounds (just an interesting theory). In 1938, it was recognized that the Ethiopian Wolf required protection. It received official protection in 1974, which seems like an awfully long time to take action.  In depth studies were finally conducted in the 1980s by the American sponsored Bale Mountains Research Project. 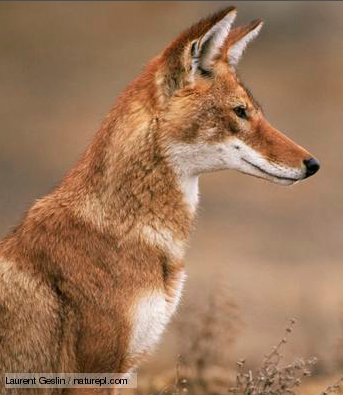 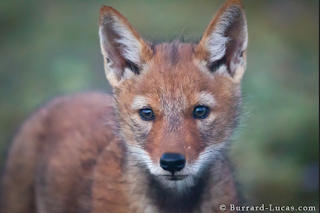 The Ethiopian Wolf Conservation Program (EWCP) was established in 1995. Current threats to the species include diminishing habitat due to expansion of human populations, overgrazing, and disease transference from free ranging dogs. The likelihood of local extinctions has increased as a result of habit depletion. As stated above, rabies and distemper are serious problems as well, and vaccination programs are being conducted by the EWCP. Information on their studies and programs can be found at the following web site:

Finally, hybridization with domestic dogs further threatens the survival of the species.

These wolves live in close-knit packs with strong social bonds.  All the adults in a pack will gather at dawn and dusk to mark their territory thus repelling intruders. They will then sleep curled together in the open.

As of 2008, their numbers are estimated at around 500, with 250 breeding individuals. The Bale Mountains of Ethiopia is now a national park and we hope that this will help to protect this beautiful wolf. 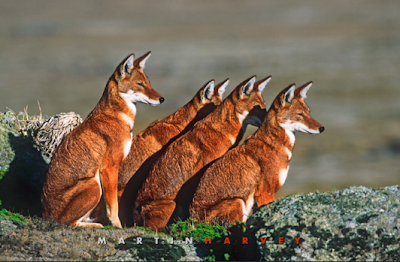 Below is a video produced by the BBC and narrated by David Attenborough. It is beautifully produced and is well worth the watch. If you are not on my blog page, you may not be able to view the video.

As always my thanks to http://arkive.org  for some of the information and pictures I have included in this blog post.

For more information, you can visit the following BBC site.