THIS BAT WON’T FLY
Many bat species are endangered. I know for a fact that here in the northeastern part of the U.S., you can’t kill a bat. We found that out first hand when a bat family used our attic for a home. They were safely removed to another better home. I digress. We are not going to talk about that kind of bat. This week we take a trip to Australia to learn a bit about a bat that won’t fly. 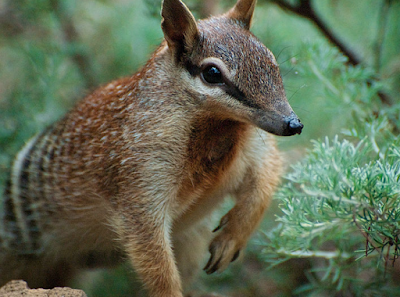 The Numbat is a carnivorous marsupial indigenous to Australia. It is also known as the Banded Anteater. Their favorite meal is termites or white ants, which it catches with its very long sticky tongue, a trait that it shares with the anteater. The Numbat requires about 20,000 termites each day. It collects the termites from dead trees, logs and leaf litter. This graceful and slender marsupial can grow to a length of seven to eleven inches and weigh from one to one and a half pounds. 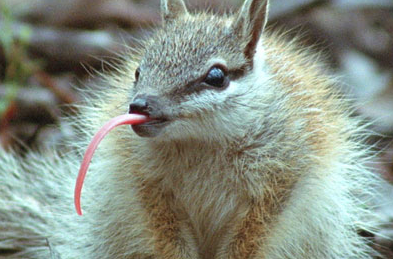 Numbats are gentle and solitary animals, active mostly by day. When they're not busy hunting and eating termites, they like to sleep in an old log or fallen tree. They have beautiful markings, and a busy tail, which they carry erect and fluffed out like a bottlebrush. A black stripe runs along the sides of their face and their reddish brown fur is stiff. They have black, brown and white stripes on their backs and down their rumps. This coloring supplies the perfect camouflage in and around dry brush and fallen trees. 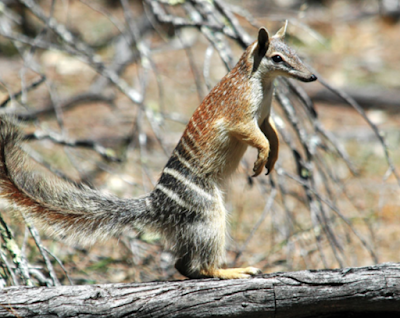 In 2008, the IUCN* listed the Numbat as endangered. Although it once existed throughout much of southern Australia, it is now limited to a few nature preserves in the southwest, which are circled on the below map. The main cause for their endangerment is habit destruction and predation by introduced species such as the feral cat and the red fox.

The two remaining populations of Numbats are being protected by extensive conservation efforts. Breeding and reintroduction programs are in place to help ensure the survival of the species.

The Perth Zoo in Perth, Australia is doing their share to ensure the survival of the Numbat. Check out this video in which a zookeeper discusses the zoo's dedication to raising and releasing baby numbats.

If you’d like to learn more about this unusual marsupial, check out the following sites.
http://bagheera.com/index.htm
http://www.arkive.org/numbat/myrmecobius-fasciatus/image-G8549
http://a-z-animals.com/animals/numbat/

I do hope you have enjoyed this week’s post. Please visit again, and feel free to leave a comment or ask a question.
Enjoy!