THE RINGTAIL
by, J.E. Rogers

I once rode horseback through the Sonoran Desert in Arizona, but I didn’t see one of these little guys. It makes sense because I rode during the day and the Ringtail (Bassariscus astutus) is nocturnal. The scientific name, Bassariscus astutus, means ‘cunning little fox’ and the name Ringtail was bestowed on him for the black and white rings which run the length of its tail.

I’ve wanted to learn more about the creature who just happens to be Arizona’s state mammal. 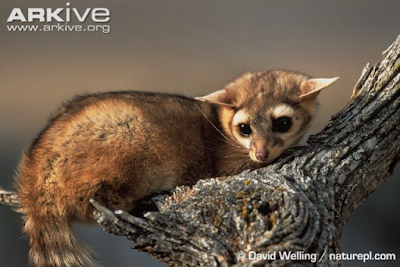 The Ringtail is also known as the Ring-tailed Cat, and it has some interesting relatives. It is related to the Cacomistle and the Coati. They are all members of the raccoon family.
Cacomistle
The name Cacomistle, comes from the Nahuatl language (tlahcomiztli) and means "half cat" or "half mountain lion"

The Ringtail is arboreal, and like many other arboreal creatures, it can rotate its back feet 180 degrees. This rotation enables the Ringtail to descend trees and rocks head first.

Although the Ringtail is considered a carnivore, munching down small mammals, birds, and reptiles, it will also dine on fruit. As a result, in some of the articles I read, it was referred to as an omnivore. He has truly earned its nickname, ‘cunning little fox,’ for he will adjust his diet according to what may be available seasonally. He also does not need a lot of water, which is good because his habitat is arid. To help reduce the loss of body fluids, the Ringtail can produce concentrated urine. 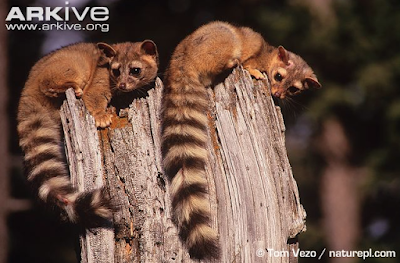 Their eyes are large and black, surrounded by a white ring. In the daytime, we use black to reflect sunlight from our eyes - think football players. At night, the white ring around the Ringtail’s eyes helps to direct more moonlight into the eyes thus improving already good nocturnal sight.

Ringtails range across the southwestern USA and most of Mexico with outliers in northern California, Nebraska, Missouri and extreme southwest Wyoming.

I have found a video that provides a great deal of information about this wonderful little critter. Take a moment to watch it.

If you want to learn more about the Ringtail, visit the below listed websites.

I hope you will return again next week when we’ll visit with another unusual animal.

Jeanne E. Rogers, Award Winning Author
The Sword of Demelza, The Gift of Sunderland and
One Hot Mess, A Child’s Environmental Fable
Where Endangered Animals Heroes Roam the Pages!
AVAILABLE ON AMAZON! 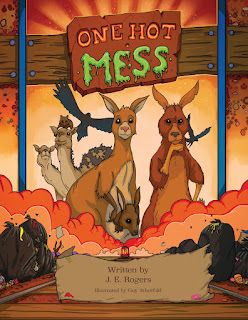