We’ve been spending a lot of time on the ground in Madagascar with some very unusual mammals. This week I thought why not head up to the trees, jump over an island from Madagascar, and visit a different kind of mammal. We’re headed to Rodrigues Island, east of Madagascar.  It’s that little red dot on the map. 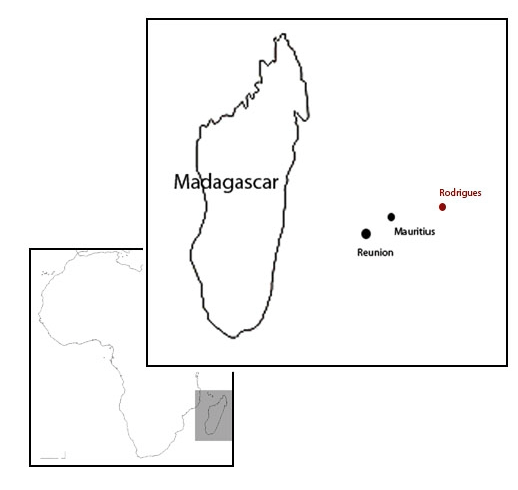 We’ll learn a bit about the Rodrigues Flying Fox, which as you will see from the below picture, is not a fox at all, but a bat! I am excited to talk to you about this mammal because, generally speaking, bats are really interesting creatures, and this particular bat is different from other bats! 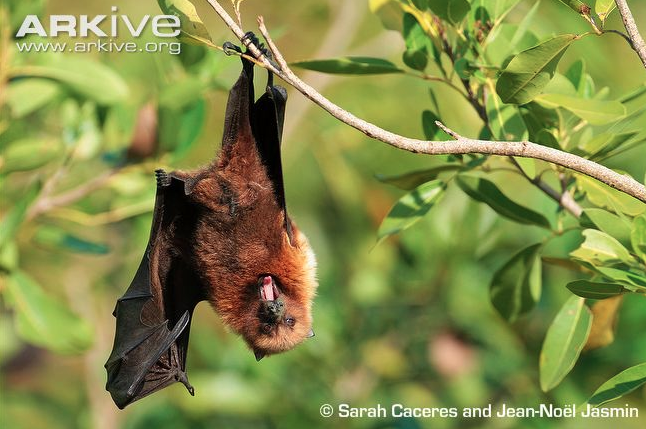 A big ‘HELLO,’ from the Rodrigues Flying Fox, to all the kids
in classrooms that read & love my blog!

Before we get to the details, I wanted to point out to you that bats have played a major role in literature, folklore and mythology. The idea of bats as evil creatures of the night has existed for thousands of years. Bats have been deemed as creatures of the underworld, symbols of death and trickery. The Mayans believed that bats actually guarded the entrance to the underworld. Don’t get me started on all those vampire stories, TV shows, movies…we could go on an on. What does it all say? It says that people in general are very interested, fascinated and curious about bats. So let’s dismiss the mythology and stories for now, and meet a member of the group Chiroptera. The word Chiroptera comes to us from the Greek, meaning ‘hand-wing.’

Below is a super illustration by Paul Mirocha, (Bat's 'arm' /wing structure) which shows the bone structure in the human arm, a bird’s wing, and the wing of a bat. Note that the green bones those of the fingers. The ‘fingers’ of a bat are elongated and between those elongated fingers is the leather that forms the bat’s wings. So it’s clear now why scientists use the term Chiroptera to describe bats. 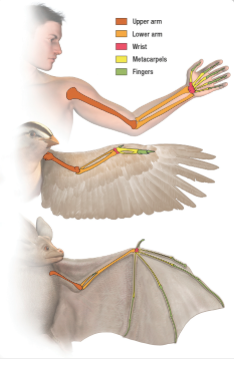 Let’s get back to some other details about this week’s subject, the Rodrigues Flying Fox. As I said above, this bat is very different from other bats. Most bats are nocturnal.  You may recall that nocturnal means active at night. Well, our friend, the Rodrigues Flying Fox, is crepuscular. Crepuscular means that they are active at dawn and at dusk. 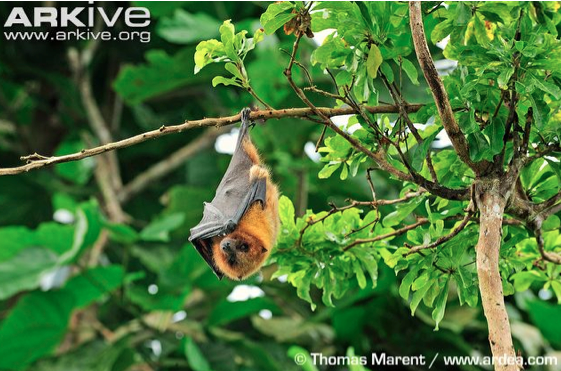 Another interesting fact that makes this bat different from others is that they do not depend on echolocation (location by sound). This makes sense. If they are active during dim light of early morning and the low light of evening, they will not need echolocation as bats that fly at night. Basically, the bats that use echolocation send out waves of sounds, and those waves of sound bounce off objects and return to the bat. Bats are experts at identifying what the object is be analyzing the sound waves that come back to them. 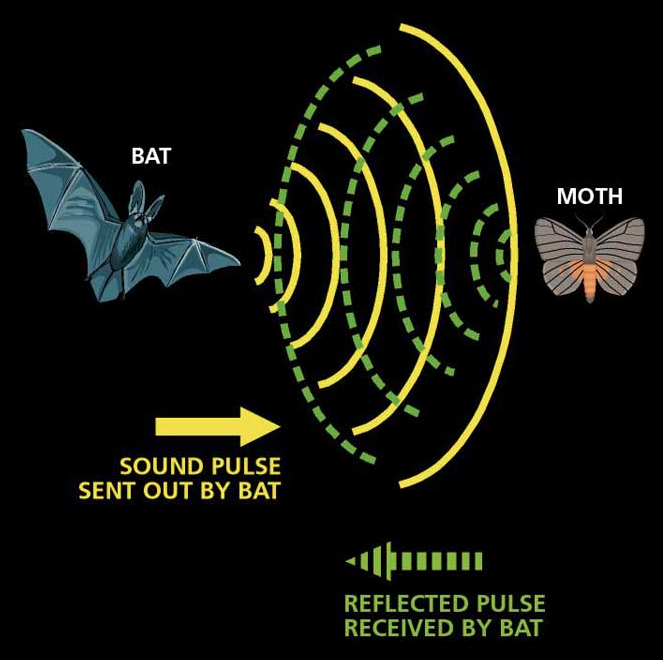 Here is a web site you can go to so that you will understand how echolocation works. http://www.bats4kids.org/echo.htm. Since the Rodrigues Flying Fox uses site more than echolocation, he has large eyes. You will also note that the ears of our friend are smaller than other bats, indicating again that they do not use echolocation like their relatives. Instead their large eyes help them to hunt by sight.  They like insects, but are also fond of fruit. As a matter of fact, their other common name is Fruit Bat.

The Rodrigues Flying Fox, weighs about a half pound, and is about thirteen inches in length. He has a wingspan of up to three feet, and he’s fairly colorful. Unlike other bats, his coloring can range from yellow, to orange and red, or even silver and black 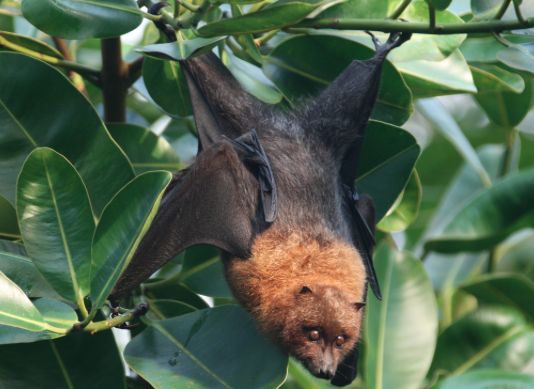 There are conservation measures in place to help protect this critically endangered mammal. There are also breeding projects and community education programs. As a result of these programs, the Rodrigues Flying Fox is making a steady recover. Let's hope he continues to do so. “The population on the island has most recently been estimated at 3000 and rising.” (Durrell Wildlife Conservation Trust, (October, 2003))

For more information on the Rodrigues Flying Fox, you might want to visit the following sites:

I thought it might be fun for you to see the smallest and largest bats. There are about 1000 different species of bats and we’ve just explored information on one of them. So let’s look at the smallest: 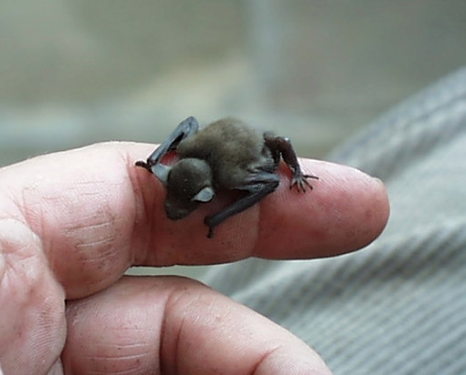 The large Flying Fox, which is also called a Fruit Bat is one of the largest bats. Our friend the Rodrigues Flying Fox is among this group. They can grow quite large.

Livingstone’s Fruit Bat has a wingspan of 4 ½ feet. 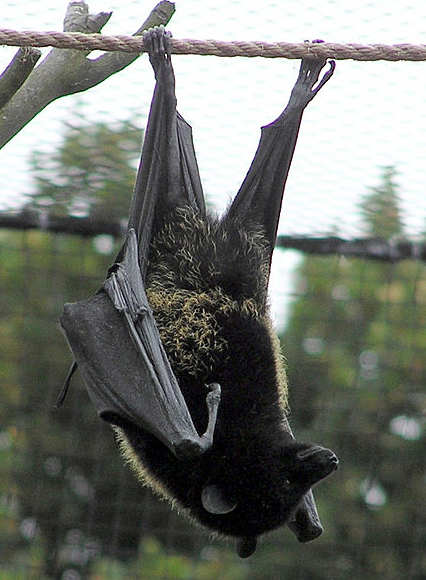 Here is a short video of our friend the Rodrigues Flying Fox.

Hope you enjoyed visiting with this critically endangered bat.

I'll be back again next week with another unusual animal.

A quick "Hello" to all my friends in classrooms who look forward to my blog every week!