THE SWORD OF DEMELZA
Dear Readers,
I have just been notified that The Sword of Demelza has received Honorable Mention in the Writer's Digest 2013 eBook Awards.

This is the best Christmas Gift ever, and I wanted to share the wonderful news with all my readers.
Thank you all so much for your kind support, and a Very Merry Christmas to everyone!
Sincerely,
Jeanne

There's no time left. Christmas is only a day away, and instead of an endangered animal blog, this week I will offer the first chapter of my middle grade fantasy, The Sword of Demelza.

I hope your Christmas is wonderful and the New Year brings you success, good health and happiness. 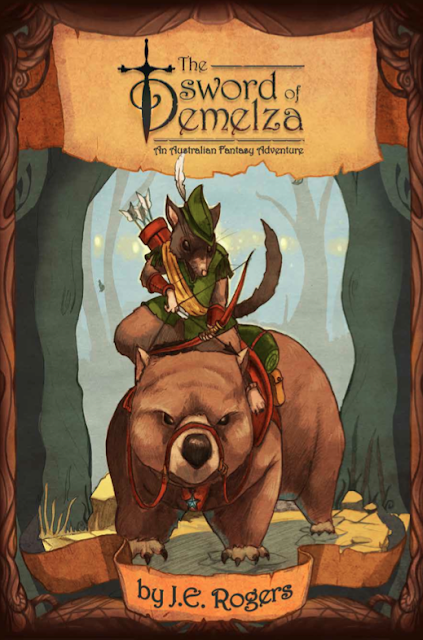 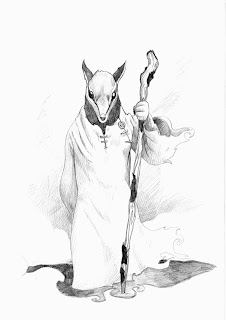 Aldon, Guardian of the Forest

Prologue
The sun was setting over Sunderland and Acadia Abbey. Devon had fallen asleep on the lookout above the manicured grounds. His auburn fur rippled in the summer breeze, and the white star on his forehead gleamed in what remained of the late afternoon sunlight.
He was still young, but he was maturing quickly. Although he was rash at times, he was a strong and clever fox. He loved the monks of the abbey, especially Colum. The old bilby monk had taught him many things about the wild world and soon he would be old enough to leave the abbey and be a part of it. After the tragic death of his mother and father, Colum had taken him in. Devon looked after Colum now that the small mouse-like marsupial was beginning to age. The young fox was dedicated to him and the other monks of the abbey as well.  But he often thought of the father and mother he lost. How different life would have been if the tragedy had never happened, if he had never lost them. Still, he was happy here at Acadia. He had all he needed, and life was peaceful. Peaceful, that is, until today.
In the soft rustling of sleep, Devon thought he heard the warning bell of the abbey ring. Startled, he sprung to his feet. The warning bell, he thought. Did I really hear it? Drowsy from his nap, he stumbled as he sprinted toward the tower door. The bell rang again. He stopped to glance over the wall. Cries could be heard rising from the grounds below. Flames shot out from the windows of the scriptorium. The monks of the abbey were running in every direction.
A troop of dragon lizards approached on great hind claws, running up the slope from the billabong toward the abbey. Devon had heard of the lizards but had never seen one. Colum once told him about how they traveled alone in the western lands of Sunderland, but these lizards were not loners. They were organized, clad in thick leather armor and carrying flaming torches as they ran across the lawns from the forest. Stunned, he placed his front paws on top of the rampart wall. Leaning over it, he scanned the grounds below, trying to understand what was happening. He gasped as one lizard threw a lit torch through an open window. Across the lawn, near the gardens, two lizards laughed as they tossed a small monk between them. One monk was being dragged across the lawn and down to the banks of the billabong, where he was thrown into the water. Several lizards had broken through the main gate. They are in the abbey. The thought terrified him. Colum, he must reach Colum. 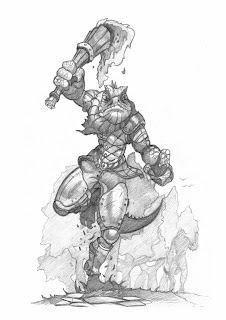 Devon pushed away from the wall and ran. Flames and acrid smoke met him as he opened the tower door. He buried his muzzle in the crook of his arm and took a step inside. Fire was consuming the wooden stairs.  He began descending the steps, leaping over the flames, but the steps and railing were burning. He could see that the framework of the staircase was breaking away from the stone wall. It began to shake beneath him, and the center pole holding it in place was burning. He would not be able to descend the steps any farther. He threw himself out toward the center post, grabbing it just as the stairs broke beneath him. Flaming pieces of wood fell to the floor below, and hot embers drifted up around him. He pushed away from the post and dropped the final distance to the floor.
Huge wooden pillars and a series of immense wooden beams supported the high-arched ceiling of the nave. He watched in horror as the blaze grew from the floor toward the roof. The entrance to the scriptorium was down a corridor at the far end of the nave. Devon sprinted toward it. As he turned into the scriptorium’s outer hallway, he found his way blocked by a pile of smoking timbers.
“Father!” he screamed as he began to climb over the debris. “Where are you?” There was no reply. A cracking sound came from above. Startled, Devon lost his footing and fell to the stone floor. Over the noise of the crumbling roof, Devon heard an evil, guttural growl. Turning toward the sound, he saw a creature creeping toward him through the smoke and flames. It was a thylacine. Its mouth, full of saber-like teeth, hung open and its wicked yellow eyes drilled into his.  From somewhere in his memory, Devon recognized the knifelike canines, heard echoes of its malevolent growl, and felt the same hatred he had felt years before emanating from the evil beast. The wolf-like body was thin and half-striped like that of a tiger, and its thick tail trailed behind it, scraping the stone floor. Frozen with fear, Devon’s heart beat as though it would burst from his chest. He shook his head in disbelief as he scrambled on all fours, backing away.
“The Demon,” Devon whispered under his breath. Shivers crept up his spine as memories came flooding back. Demon is what his father had called the thylacine back on that fateful day.
“Yes, you can call me that. But my name is Flitch!” The thylacine spat out his name like a curse. “I remember you!” he hissed with satisfying surprise. “You are my unfinished business.” Flitch took a step closer to Devon. “It’s so nice to see you,” he said with an evil grin. “You got away once, but it won’t happen again.”
A loud crack from above warned that a rafter was weakening. Devon ducked into a small alcove as a beam crashed to the floor.  It broke into hundreds of sharp shards, sending burning projectiles in all directions. One struck the thylacine in his hind leg, and he let out a scream of pain that echoed throughout the abbey.  He limped toward Devon, who scrambled up the pile of smoldering wood to get away from him. The injured thylacine attempted to follow, but he could not climb the debris.
“Another day, Fox!” he snarled. Turning, he staggered away.
Devon climbed over the debris and continued on into the scriptorium. Desks were overturned, and smoking remains of illuminated texts covered the floor like snow.
“Father! Answer me!” Devon frantically peered through the smoke and scanned the ruins of his father’s beloved library. He spied a small paw sticking out from under a large desk at the far end of the room. The wall behind the desk had partially fallen in and the stained glass window hung precariously in its frame. The setting sun shone through what remained of the image of the sword and created beams of light that covered the room in shades of blue and green. The center stone on the sword’s hilt cast an eerie glow on the top of the desk. Holding his breath Devon crossed the room and braced for the worst. With all his strength, he groaned as he lifted the heavy oak desk. It toppled over, sending ashes flying into the air, where they floated slowly, like phantoms, in the shafts of the setting sunlight. Colum’s small body was curled in a ball seeming somehow even smaller in death. Lifting his father, Devon’s tears flowed shamelessly. With his father’s body resting in his arms, he left the abbey through a gap in the wall where the dragons had torn down the stones.
Bilby monks ran frantically across the grounds and fields outside the walls, putting out fires, attending to the wounded and gathering the dead. He could see the dragon lizards heading away from the abbey in the distance, their cruel laughter reaching his ears as they disappeared into the forest. It was a vision that Devon would never forget. Once, long ago, Colum had carried Devon to the safety and warmth of Acadia Abbey. He would now carry his father away from the wreckage of the abbey and lay his body down on the banks of the billabong. 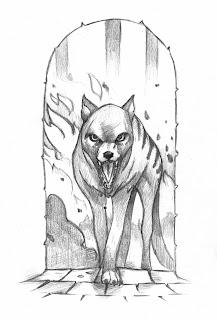 
Now, Colum rested on the banks of the billabong. Raising his eyes toward the ruined monastery, Devon saw a small group of monks gathering on the lawn.  They spoke quietly with one another, a mixture of fear, worry, and sadness etched on their faces.
He continued to gaze at the abbey and the remains of the stained-glass window. The sword’s colors were dark now that evening approached. What was the purpose of the sword? The image of a terrible weapon meant only to bring harm and pain had always seemed a strange object for the peace-loving monk’s abbey. The sword seemed to shimmer with a life of its own in the evening light. For a moment, he thought he saw the thylacine standing beneath the tip of the sword, but it was just his imagination. He drew in a deep breath, and then dropped his head to look at Colum. He vowed to find out why this happened and who had brought this destruction down upon the abbey. He would have to look deeper, as his father had taught him.  The mystery of the sword would remain for now. There were other questions that needed answers. He may never understand why a sword was emblazoned in the stained glass window, but that didn’t matter anymore. Colum was gone. The time for stories and mysteries was over. He furrowed his brow and narrowed his eyes as anger took hold. There was only time for revenge. He would take up his own weapon, the ancient wooden staff that Colum had found with him so many years ago.  Devon knew nothing of its powers, but he would wield it against those who had brought pain and terror to his home. He would hunt down the dragon lizards. He would kill the thylacine. He would make them pay for what they had done this day, for what they had done to his father.
The screech of an owl echoed through the woods beyond the billabong, and a feeling of dread came over Devon. The time had come for him to leave the place he had come to know as home. 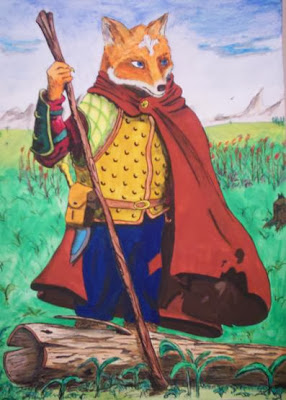